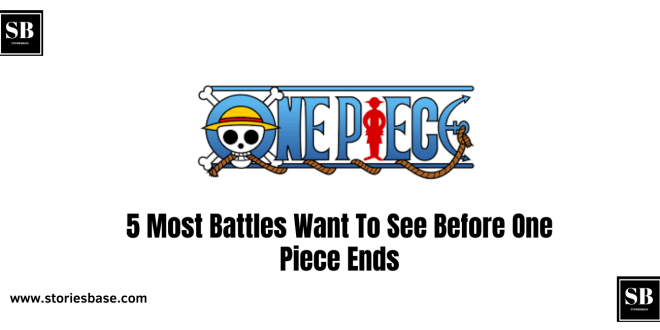 5 Most Battles Want To See Before One Piece Ends

Since it was first released in 1999, the One Piece anime has presented many epic and unforgettable battle moments. Starting from the fierce battles between Luffy and Doflamingo, to the fight against Kaido and Big Mom which is currently ongoing, One Piece has many fighting moments to cover.

While the series has already satisfied fans with plenty of epic fights, there are still some fights that fans will want to see before the series ends. Want to know the battle between who is the most awaited in the One Piece series ? Just take a look at the following reviews, OK!

Blackbeard is believed to be the person who will be the last enemy to be defeated by Luffy. Both of them aim to become the Pirate King. Chances are the two will fight in Laugh Tale.

Blackbeard himself is a former member of the Whitebeard Pirates who managed to steal the devil fruit and his former captain’s title as a Yonko. Right now, Blackbeard might still be stronger than Luffy. However, if Luffy can beat Kaido and Big Mom, it’s not impossible to beat Blackbeard. Considering it will also be the final battle, the fight between Luffy and Blackbeard should be many times more epic than his fight against Kaido and Big Mom.

The fight between Zoro and Mihawk actually happened at the beginning of the series, precisely in the Baratie arc . At that time, Mihawk could easily defeat Zoro with just a small knife. It was clear that Mihawk was on a completely different level.

As time goes by, Zoro keeps getting stronger. Moreover, Zoro also trained with Mihawk during the time-skip . It is possible that in the end Zoro can defeat Mihawk.

Once known as Akainu, Sakazuki currently serves as Fleet Admiral in the Navy. Sakazuki’s name became famous after the Peak War at Marineford, where he killed Portgas D Ace in front of Luffy.

The fight between Luffy and Sakazuki is eagerly awaited by fans because this fight will be private. If usually Luffy fights to save others, this time Luffy will fight to avenge his brother’s death. That way, this fight will not only be epic, but also emotional.

4.Battles Of Vinsmoke Sanji vs. Kizaru

As seen in the Sabaody Archipelago, the strength of the owner of this real name Borsalino is not to be underestimated. With the power of a devil fruit that allows him to manipulate light, Kizaru can easily defeat the Worst Generation.

Well, Sanji is called a commensurate person to fight against Kizaru. The reason is, both of them rely on their feet in fighting. In addition, Sanji is also said to have Haki abilities that can rival the power of Kizaru’s devil fruit.

When Ace chased Blackbeard, Shanks asked Whitebeard to stop Ace knowing that Blackbeard was not Ace’s rival. Sure enough, Ace was defeated by Blackbeard and brought to Impel Down.

Undoubtedly, if the five battles in One Piece do happen, then that fight will be the most unforgettable moment in this series. So, from the five battles above, which fight are you most looking forward to?