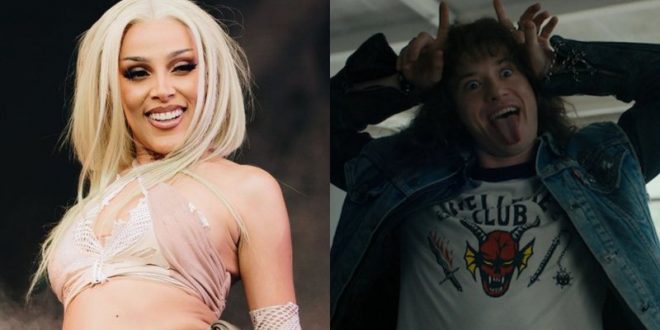 The series ” Stranger Things ” is booming around the world with the release of its fourth season. One of the highlights was actor Joseph Quinn, who played the character Eddie, and gained thousands of fans, including celebrities.

Rapper and singer Doja Cat showed interest in the Brit in conversation with co-star Noah Schnapp, aka Will. Over TikTok, he shared a conversation he had with the hitmaker “ Say So “.

“Noah, can you tell Joseph to come talk to me? Don’t wait, does he have a girlfriend?” asks Doja. Noah has fun and encourages his friend: “Laughing a lot. Send him a DM (direct message).”

Then the singer says she doesn’t know what Joseph’s Instagram is and receives from the actor the profile of her colleague. “Here is madam.”

In a video posted by Schnapp on TikTok, the actor who plays Will in the series shared a screenshot of a conversation between him and the rapper. The video begins with a fan displaying Doja ‘s comment on a photo of Quinn on twitter with the caption, ” Doja , look how well Joseph Quinn is doing.” And the singer replied: “It becomes a crime.”

Then Schnapp shows the conversation between them, with Doja asking, “ Noah can you tell Joseph to hm? Do not wait. Does he have a girlfriend?” So the actor encourages her to call him, “DM [ direct message ] him,” but she replies, “I don’t know his Instagram or Twitter. He doesn’t have a DM for me to text.”