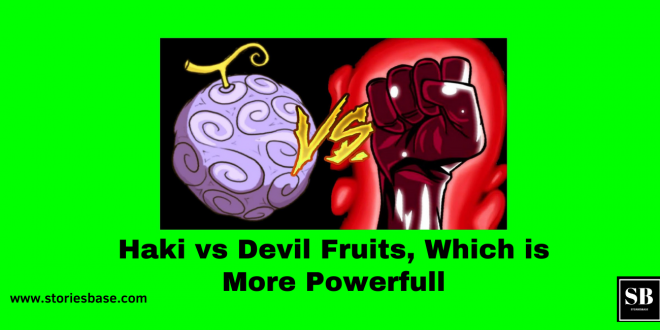 Haki vs Devil Fruits, Which is More Powerfull in One Piece Anime?

The following is an explanation of which is stronger between haki vs devil fruits in the One Piece anime .

Eiichiro Oda has actually explained which power is more powerful between haki and devil fruit .

Oda Sensei does share two sources of power in the One Piece anime , namely haki and devil fruits . However, there are still many who are curious which one is stronger of the two.

Devil fruit is one of the important elements in the One Piece story . Devil fruit itself is often referred to as the “treasure of the ocean” and devil fruit gives extraordinary powers to those who consume it.

However, of course there is a “price” to pay for this, namely that devil fruit users cannot swim.

Referring to this reason, fans began to question the pure power of Devil Fruits. Are Devil Fruits not stronger than Haki?

This can be seen in the battle between Kaido and Luffy in recent chapters.

At that sudden moment, Kaido told Luffy that a powerful devil fruit was not enough to be able to conquer the entire ocean.

Kaido even mentioned the figure of Gol D. Roger where he mentioned that Roger managed to conquer the ocean and become the pirate king without the help of a devil fruit .

Kaido then asserts that to be able to conquer the ocean a pirate must have strong Haki.

There are several things that make Haki superior to devil fruits :

Trending:  6 Most Respected One Piece Characters of All Time

Eiichiro Oda has often pointed out that high-level Haki is a bit more epic and more powerful than the power of a devil fruit awakening .

This can be seen from the story of Doflamingo. Doflamingo is known to have succeeded in awakening the power of the Ito Ito no Mi, but he is much weaker than Luffy or someone far above him.

Katakuri is also one of the characters who rely on the devil fruit Awakening as a source of strength.

However, even though Katakuri is a strong figure and has never been defeated at all, he is not included in the ranks of characters considered the most powerful or a level above him.

Katakuri and Doflamingo managed to awaken their devil fruit powers , and they were also able to use Conqueror Haki.

But unfortunately, they couldn’t use Advanced Conqueror Haki.

Eiichiro Oda himself even presented a dialogue that could be said as proof that Advanced Conqueror Haki’s abilities were superior to Awakening.

An example is how fans were hypnotized by how Luffy activated Conqueror Advanced Haki compared to when Law and Kid awakened his devil fruit powers.

Kaido himself even said that only those who were considered the most powerful, only a few strong people could use Advanced Conquering Haki.

Accordingly the explanation which is stronger between haki vs devil fruits in the One Piece anime .