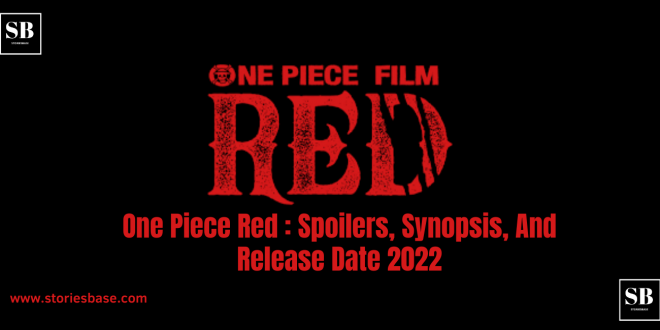 One Piece movie fans were surprised by the news of the emergence of the latest film series, One Piece Film Red . How could I not, recently fans have just reminisced through the opening of “We Are!” in the 1000th episode, then came the announcement of his latest film project. Check out the synopsis , show schedule and interesting facts of One Piece Red below.

This One Piece Red film is said to be more interesting where at the end of the teaser it will show characters who play an important role throughout the One Piece series that airs. The character in question is of course Shank.

Shank is a red-haired man who was a former member of the legendary Roger Pirates, the only group that managed to conquer the Grand Line. In addition, he is a pirate figure who inspired the main character of the One Piece series, namely Luffy who managed to make his journey as a pirate.

Until this news is published, there is no further information regarding the synopsis of the One Piece Film RED. However, the latest One Piece film series is highly anticipated by its fans in 2022. They can’t wait to see the continuation of the journey of the Mugiwara pirate group aka the Straw Hats.

In the cultivation of One Piece Red will involve Goro Taniguchi as Director. He previously also worked on the One Piece OVA (Original Video Animation) which aired in 1999, entitled Defeat Him! The Pirate Ganzacks.

Not only that, Tsutou Koroiwa is also said to be returning to write the screenplay for One Piece Film RED, after previously being involved in making the One Piece Film Gold series. Finally, what should not be missed is the involvement of Eiichiro Oda with Toei Animation in producing this latest One Piece film.

As it is currently still in development, the film is slated to premiere on August 6, 2022 in theaters in Japan. For those of you fans of the One Piece series, please be patient waiting for it to air.

Facts of One Piece Film Red

Just like the previous One Piece series, One Piece Red also has a number of interesting facts, including:

1. One Piece Red will be directed by Goro Taniguchi, after two decades involved in the production of One Piece films. He is also famous for working on the anime franchise Code Geas.

2. Taniguchi was the first to introduce the character Luffy, as the main character through the anime.

3. In the One Piece Red series, the character of Akagami no Shank will be more focused. This can be seen from the latest One Piece Red teaser that has been shown.

4. One Piece Film Red is the 15th film that Eiichiro Oda collaborates with with several other parties. Like his other films, Eiichiro Oda will be actively involved and help oversee the production process for this film to completion.

That was the review regarding the synopsis, broadcast schedule, and interesting facts of One Piece Red . The screening of the latest One Piece series is planned for its premiere on August 6, 2022. Hopefully this information can answer your curiosity about the legendary anime series.